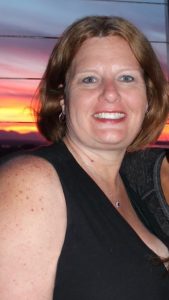 Julie Marie Florentino, age 52, a resident of Lakewood, CA passed away on May 27, 2020 after a courageous fight against a rare cancer, leiomyosarcoma. By donating in her name, necessary research can be conducted to help find a cause and dependable treatment options for this aggressive soft tissue cancer.

Her determination, will to live and fight to overcome all obstacles radiates great strength and inspires everyone who knew her.

Julie was born on June 30, 1967 in Torrance, CA to the late Elizabeth and M. Wayne Poulson. Julie’s parents and her older sisters, Diane and Ann, were overjoyed and wonderfully surprised with her and her twin brother Allen’s arrivals, since twins were not expected but lovingly welcomed.

Julie grew up in Carson, CA. During her kindergarten year, Julie met her two best friends, Jolene and Marlene, who would remain her “rocks” as she called them for the rest of her life.  Among the many activities she participated in during her childhood years were softball, where she excelled as both a pitcher and catcher, and as a “flag girl” in the Los Caballeros Youth Band.

At the age of 14, Julie met her future husband, David C. Florentino. They married in 1991 at California Heights United Methodist Church in Lakewood, CA. The happiest moment of Julie’s life was the birth of their daughter, Taylor Marie, in January 1995.

Julie and Taylor’s relationship was a very special one. Not only were they mother and daughter, they were best friends and confidantes. During her battle with cancer, Taylor was her strongest supporter and managed every detail of her medical care. We remind everyone to “be your own advocate” in your medical experiences and research all that you can.

Special memories shared by Julie and her family of friends were the annual camping trips to the beach where she was usually the cook and organizer, alongside Jolene. Her love for adventure brought her to many places around the world. She’s always willing to go on any weekend trip, week long cruises, trips over seas, and any other random excuse to escape that she gets suckered into by friends and family.

Julie started her career with Lucky (later acquired by Albertsons) as a clerk’s helper, then later promoted to office manager, a position she held for approximately 27 years. As in her social life outside of work, Julie was the “mom” of the workplace making sure everyone did their job, acting as the person to confide in and setting the example for everyone to follow. While she would sometimes display her sarcastic side or question those in authority, she only had the best interests of her fellow associates in her heart and respected everyone she worked for and with.

The zest for life Julie shared was as big as her ever present smile. She was always the one who said life is very short and we need to live every moment to the fullest and do what makes us happy. Julie and her “tribe” participated in many 5K fun runs, attended plays and concerts, including Stagecoach, which was a tradition. Her many trips with family and friends to various cities and countries, including one resulting in complete lost luggage for the duration of the whole week-long trip in Ireland, were some of her most memorable life experiences. Her most recent trip was to Nashville with her two “rocks” Marlene and Jolene, to knock things a few more things off their bucket list such as Luke Bryan’s restaurant and Graceland.

Julie will forever be remembered as our ‘Jules’ with her huge smile, spunky sarcasm, and love of life.