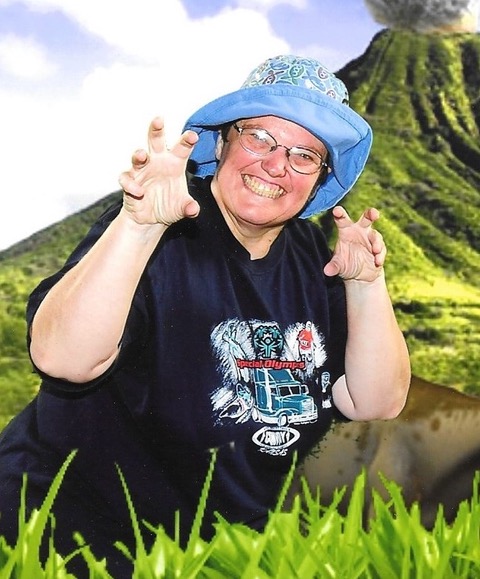 Norma had unique responses to her world.  Our family calls them Norm’s. A few are sprinkled throughout this remembrance.  They are our family’s expression of love for Norma.

Norma was associated with Arrowhead West, Inc., a center for adults with intellectual disabilities. Through AWI she participated in Job Club and every contest for clients.  One was a calendar photo contest. Norma was very excited that she won. It was a picture her sister took. When told this, Norma’s said, “I know. Mine didn’t turn out good.”

Norma enjoyed Special Olympics Bowling.  Her last bowling tournament, she did not earn. She said, “My game was off.”

Norma loved the independence driving gave her. She did not like her last car because she could not reach the button to change the clock without bending forward. When asked, “Why not bend forward? How many times do you change the clock in a year?”  Norma said, “Never”.

Norma also loved traveling.  For some reason she loved visiting a place her mother had not visited.  After visiting Niagara Falls, Norma sent her mother a poster card with one sentence. “You missed it!”

Perhaps more than driving and traveling, Norma loved football.  Her favorite teams were the Nebraska Corn Huskers and the Denver Broncos. She had a somewhat friendly rivalry with a brother who is a KS Chiefs fan. The Broncos were playing the night before Norma had a test to gather more information about her tumor. He told her he would cheer for the Broncos but she said that she didn’t believe he would.  When asked why she didn’t believe him, she said, “I won’t cheer for the Chiefs.”

During Happy Hour at a hotel, Norma was told she could order an alcoholic beverage.  Norma said she might because every once in a while, she has a wine cooler.  After this confession, she quickly added, “Don’t tell mom.”

Norma was a member of the First Church of God in Dodge City.  While she was in the hospital and we were updated with news of her condition, she would always say, “Call my Pastor. I know the church is praying for me.” This gave her much comfort.

On September 9th, we received news that Norma had leiomyosarcoma of the uterus and had less than a year to live.  Her family was committed to make that year the best we could.  But we didn’t have less than a year.  We had less than a week.  Norma passed away on September 13, 2014 at the age of 50.  We really think she just wanted the Big Guy’s influence over the Broncos/Chiefs game on the 14th.

During a routine doctor’s visit, the doctor explained you cannot choose your family so you don’t have control over hereditary conditions such as diabetes. Her sister asked Norma, “The doctor said you can’t choose your family, but you chose me for your sister, right?”  After what seemed to be a long time, Norma tilted her head, smiled and said, “Yeah, I choose you for my sister.”  But really any family member could have asked her that question and she would have said, “Yeah, I choose you”. Then spread her arms as wide as she could and say, “I love you this much.”

Norma loved us unconditionally.  She would love you even if you were a Chiefs fan.  Yes, we are truly lucky because Norma chose us.